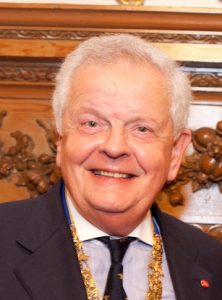 From time to time there are a few outstanding people who work to further the interests of their industry, over and above their duties to any individual company. The Paper Industry, like any other, owes its success to the commitment, effort and skill of these ambassadors and for over thirty years has sought to reward this commitment in the form of a prestigious annual award ‘The Paper Industry Gold Medal’ and, since its inception in in the late 1960s, the Medal has been awarded to the person considered to have done most to further the interests of the paper and allied industries in the UK.

For 2016, the award has been bestowed upon Mr Kevin Dewey, former CEO of Hedsor Board, in recognition of the exceptional contribution to the Paper Industry over many years.

Kevin has been described as a ‘natural leader’ and has always responded positively to new opportunities and the changing needs of those around him, he has made an outstanding contribution to the wider Paper Industry and, more recently the Training & Education needs of those starting their career in the Paper.

Kevin took over the running of his family board merchant business, Hedsor Board, and restructured the operation before integrating the operation within a larger Finnish Group; during his time as CEO of Hedsor Board, he was elected as President of the National Association of Paper Merchants (NAPM).

In recent years, Kevin’s attention has turned to the Educational needs of the industry and, as Chairman of the Stationers’ Foundation, he played a pivotal role in shaping the agenda for education; leading to his appointment as Chairman of the Board of Governors of the, then newly converted, Stationers’ Crown Woods Academy and as a main board Director of Leigh Academies Trust.

The Paper Industry Gold Medal will be formally presented to Kevin at the Charter Dinner of the Worshipful Company of Stationers and Newspaper Makers at Stationers’ Hall in the City of London on the evening of Wednesday 4th May 2016.