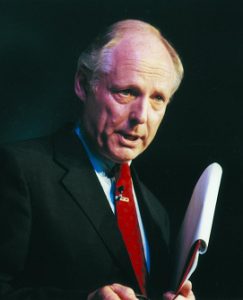 Both of Stephen Mason’s main employers, Robert Horne Group and trade body, The National Association of Paper Merchants (NAPM), gained from his skill and experience.

In his 35 years with Robert Horne he climbed the career ladder from Salesman to Chairman via Branch Manager, Group Sales Director, Group Sales & Marketing Director and Managing Director. He finally became Regional President and Chairman of Buhrmann Group’s merchant division, overseeing sales of over one million tonnes a year.

It was whilst Managing Director of Robert Horne Group that Stephen Mason took personal charge of introducing a comprehensive Management Development Programme. This programme attracted excellent young talent, both graduates and internal trainees, and developed them into outstanding and highly capable people. It is his strongly held belief that this is the way forward for the whole trade in order to meet with the up and coming complexities of the business.

Throughout his time in the industry, Stephen Mason played a full and active role in industry affairs by serving on many trade bodies and committees. Most significantly he was elected to the NAPM’s Policy Group in 1992 and was President from 1999 to 2001. As President he was instrumental in instigating and pushing through much needed changes to the way in which the NAPM was run. The association now meets the requirements of the 21st century, placing the recruitment and development of talented people into the industry to the fore.