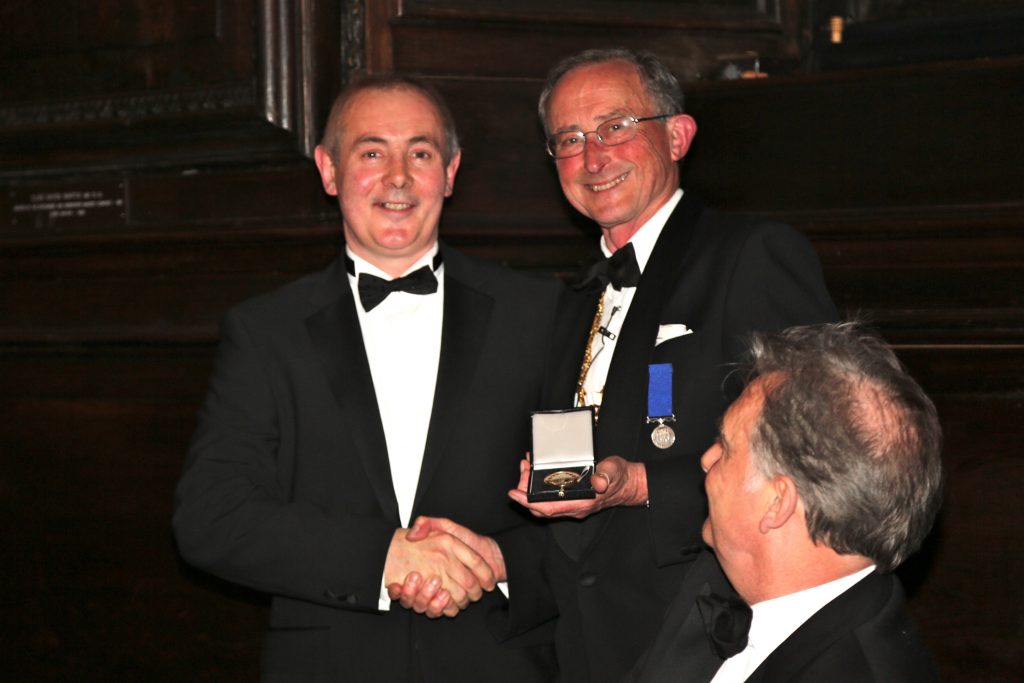 This year’s Paper Industry Gold Medal Award recipient is Peter Duxbury. Peter’s contribution to Papermaking in the UK, spanning a lifelong career cannot be overstated, but more importantly, his contributions have touched upon several key areas within the industry, combining technical and managerial skills, commercial acumen and an almost artisan passion for the science of producing high-quality paper.

In researching this citation, his contemporaries revealed numerous stories describing the antics of the young Peter Duxbury, fresh out of School, foregoing his job with a Butcher to join the Technical Department at Lower Darwen Paper Mill in Lancashire and developing his knowledge of Papermaking through day release and evening classes. Whilst many of these stories are too risqué to repeat in polite company, yet typical of the camaraderie that pervaded the Paper Industry in the early 1970’s, one former colleague waxed lyrically on Peter’s chosen form of transport as it progressed from ‘Shank’s Pony’ to the lofty heights of a Norton Commando 750, the very pinnacle of motorcycling excellence in it’s day.

In the 1980’s, Peter moved on to Kilbagie Mill in Scotland, where he was responsible for the design and construction of the first three stage deinking plant, capable of producing the highest quality fibre for the manufacture of copier papers meeting UK specifications for brightness and printability. To achieve this, Peter married together technology from several different suppliers and succeeded in, quite literally, shoehorning a ground-breaking, world-class installation into existing mill buildings on an ageing mill site. It is testimony to innovative design that a small corner of Scotland became a ‘Mecca’ for the deinking industry whilst the plant was operational.

The quality of fibre produced, combined with the skill of the Kilbagie Mill’s Papermakers, produced a sheet which demonstrated unequivocally that, what was described at the time as ‘Secondary Fibre’ could be used to produce highest quality paper products capable of competing with their Virgin Fibre based counterparts, and was instrumental in elevating the status of ‘Recovered Paper’ as a Raw Material for the production of Graphical Papers.

The innovation did not stop with the design of the plan and many years ahead of the rest of the Paper Industry, Kilbagie Mill became a central component of a vertically integrated supply chain linking, effectively closing the loop thirty years before ‘Closed Loop Thinking’ became fashionable.

Peter is an accomplished Papermaker and Mill Manager, as exemplified by his revitalisation of the charity owned, Fourstones Paper Mill. Not only did he completely reverse the fortunes of the site, changing the paper production process, the plant and the management structure within the mill, he went on to purchase and continually develop the company, leading to the re-opening of the Fettykill Mill Site (formerly Smith Anderson) in Scotland. In doing this, Peter ‘locked horns’ with Property Developers and Local Government to retain the last Paper Mill in the village of Leslie (a village which describes itself as a Papermaking Burgh), an achievement made all the more poignant by recent announcements.

Despite many obstacles, both Fourstones Mill and Sapphire Mill continue to thrive and it comes as no surprise to people who know him that Peter is currently extending papermaking operations in Leslie and reopening a second machine, at a time when larger companies are consolidating.

Peter is also a worthy ambassador for Papermaking in the UK and a forceful character, epitomising the word ‘Papermaker’ and it would be difficult to think of an individual in the UK who has done more to further the interests of the paper, Papermaking and allied industries in the UK, above and beyond what might be considered to be the normal demands of his job and therefore the Awards Committee had absolutely no hesitation in awarding Peter this year’s Paper Industry Gold Medal Award and wish him continued success in the future.